Turbomolecular pumps are one of the most iconic parts of a vacuum deposition plant. Their appearance evokes the structure of a turbocompressors of the type used in commercial jet aircraft engines (turbofans). 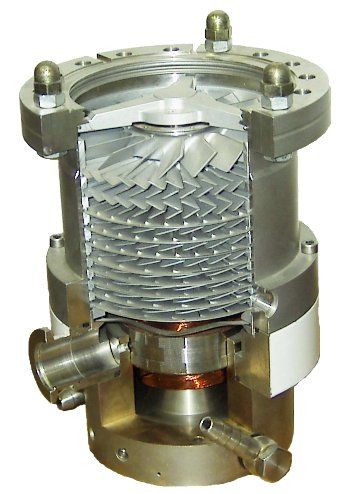 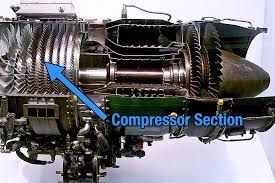 Looking at the images, you can see the clear similarity in the shape of the two machines, which can lead to think that the operating principle, in both cases, is the same. On the other hand, in one case it is a question of compressing the air until it reaches the pressure suitable for use in the combustion chamber (turbofan), while in the other the gases present in the deposition chamber must be compressed until reaching a pressure manageable by the backing pump (turbomolecular pump). So, the principle of operation will be the same, right? Not really!

The blades present in the compressor of a turbofan have, in section, an airfoil. By rotating, they transfer energy to the fluid by exploiting the fact that the air, in the pressure range managed by these machines, behaves like a viscous fluid. This essentially means that the gas molecules that compose it are present at a density value such that they are able to interact with each other, for example through collisions. On the other hand, at a pressure of 1 bar, one cubic centimeter of air contains the beauty of 2.7x1019 molecules! Compressors of this type exploit this strong interaction between molecules to transfer the mechanical energy needed by the fluid.

In a turbomolecular pump, the blades facing the vacuum chamber rotate at high speed in an environment where the pressure is generally in the 10-6 ÷ 10-9 mbar range. At these pressures, the density of the gas is lower than atmospheric density by a factor ranging from one billion to one thousand billion times. In these conditions, collisions between molecules are still possible, but much rarer: the so-called mean free path, for each of them, ranges from about 100 m to 100 km. This basically means that a molecule can statistically travel the indicated distance without encountering others: given the typical size of the vacuum chambers, it can therefore be said that all the molecules present in the working environment, at the base pressure value, they hit only against the walls of the chamber and the other solid parts present, without -in practice- ever colliding with each other. Under these conditions, viscous pumping, such as that adopted in turbofans, is essentially impossible: there would be no energy transmission between molecule and molecule and the viscous effect would be zero. The first consequence is that it is totally useless to make the turbomolecular pump vanes with an airfoil cross section: and in fact, they generally have a flat or triangular section, with a certain angle of incidence.

In this case, the blades, by rotating, act like ping-pong rackets: their role is to transfer moment to the molecules "hitting" them at high speed: this moment, given the configuration of the paddles and their direction of rotation, gives the molecules colliding with a velocity component with direction and direction oriented towards the discharge zone.

The gas present, at these pressure values, behaves like a perfect gas: the kinetic theory of gases gives us precise indications regarding the velocity distribution of the molecules present, as a function of their mass (and therefore of the chemical species considered) and of the temperature. At 300 K (plus or minus the ambient temperature value), this distribution is as follows:

It can be noted that the average speed increases as the mass of the molecule considered decreases, and is maximum for light gases such as hydrogen. Now, let's consider a turbomolecular pump equipped with blades which, at the inlet section, have a radius of 200 mm, operating at a rotation speed of 50,000 rpm. The tangential speed, near the tip of a blade, is equal to about 1,046 m / s, of the same order of magnitude as the average speed of the molecules present. This is why turbomolecular pumps have to operate at very high rotational speeds: the ping-pong balls they have to hit are just as fast! Indeed, the smallest of them (helium and hydrogen) are so fast that our "rackets" struggle to manage them: for this reason these gaseous species are the most difficult to remove in a vacuum chamber, if you uses a turbomolecular pump. In the event that significant quantities of these gases are present, or if a very high basic vacuum (e.g. 10-9 mbar) is to be reached within a reasonable time, it is therefore more convenient to use other pumping devices (e.g. cryogenic pumps or ion pumps).

Although turbomolecular pumps and axial compressors have a strong geometric similarity, their operating principle is profoundly different. In the case of turbomolecular pumps, the flow rate is of the molecular type, and therefore the construction principles must be based on the study of the kinetic theory of gases, rather than on that of the viscous motion of a fluid.