In a plant that operates in high vacuum conditions, the pumping system is used to remove the air present in the work chamber. Is this a true statement?

Well, only partially, let's say. What is true is that in the initial stages of the pumping process, the pumps remove the air present, consisting mainly of nitrogen, oxygen, argon, water vapor and traces of other gaseous substances present. At a certain point, however, it is no longer the gas present in the volume of the chamber at the beginning of the process that dominates the flow of gaseous species managed by the pumps, but that generated by the outgassing phenomenon. What is it about? It is easy to say: outgassing is the flow of gas generated by the release of volatile species from the internal surfaces of the vacuum chamber, including those resulting from the presence of objects positioned inside the system, to be treated. This release of gaseous species has as its protagonist a very small molecule capable of forming very stable bonds with metal surfaces: water. Considering a vacuum chamber made of stainless steel, its walls, as is known, will be covered by a very thin layer of chromium oxide: the molecules of H2O deriving for example from atmospheric humidity, will easily anchor to it, forming a layer almost uniform of chemi-adsorbed water. Often, this layer is not a simple monolayer, but a multi-layer, in which greater quantities of water are present, depending on the environmental conditions to which the chamber has been exposed (for example, in the case of humid days, the situation will be worse). There is a The molecules in question are strongly linked to the surface on which they are located, so detaching them from it requires a certain time and a certain effort. In practice, it takes a certain time of exposure to a sufficient degree of vacuum for the water molecules to detach from the metal surface, to be then removed by the pumps. 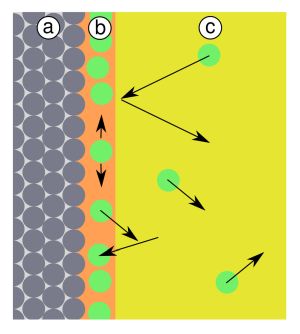 The process can be accelerated by heating the vacuum chamber to a temperature of at least 110-120 ° C or more, to favor the release kinetic: this is possible as long as the material to be treated does not deteriorate due to the temperature.

But, in practice, how long does it take to ensure that all (or almost) of the water present is desorbed, allowing the achievement of high vacuum degrees?

The quantity of chemi-adsorbed water, from a quantitative point of view, is normally very small: a monomolecular layer of water has a specific weight of the order of magnitude of 1 mg per square meter. Unfortunately, when the water is desorbed, it turns into steam, which expands at the low pressures necessary to generate outgassing, occupying significant volumes. For example, assuming that the desorption is totally irreversible, the milligram of water produced by outgassing from a surface of one square meter, at a pressure of -for example- 1e-4 mbar, occupies a volume of about 12,200 liters, which must be entirely managed by the pumps!

Having said that, let's get to the point: the surface finish. You may have noticed that the finishing of the internal surfaces of the vacuum chambers tends to be more and more accurate as the basic vacuum you want to obtain is more severe. The reason is that the amount of water that must be managed due to the outgassing phenomenon increases with the increase in the surface roughness of the chamber. Leaving aside secondary effects, the main reason is that if the roughness increases, the actual surface area increases, compared to the nominal one. In practice, a non-perfectly smooth surface of 1 sqm has an effective area exposed to vacuum above the nominal value.

This effect is well known to those who need, for example, to carry out gluing or painting: since these are processes in which adhesion depends on the effective contact area, we try to maximize it, increasing the roughness of the substrate. In our case, the need is the opposite: to make the surfaces as smooth as possible, to minimize pumping times.

In practice, the possibility of working with mirror polished surfaces is only available in EHV (extremely High Vacuum) chambers for scientific use. Vacuum systems tend to get dirty due to residues of deposited materials, so it is preferable to use a finish that is a good compromise between minimization of the effective surface area and ease of cleaning. This is the reason why the chambers produced by Alca are internally shot-blasted with ceramic microspheres: experience shows that this type of finish is ideal from a practical point of view.

Happy vacuum to everyone!