If you are interested in ultra high vacuum processing, you have surely heard of diffusion pumps. What is it about? How do they work? What are their advantages and disadvantages?

In this short tutorial we will try to answer these questions.

Diffusion pumps are static devices, that is, without moving mechanical parts, used as primary pumping devices in systems in which the required degree of vacuum is in the range between 1e-4 and 1e-9 mbar. These are the first devices developed capable of generating a pumping action in the so-called molecular vacuum regime, ie the one in which the free path of each molecule present in a closed chamber is greater than the size of the chamber itself. Under these conditions, the molecules move at high speed, essentially hitting only the walls of the vacuum chamber and the internal components of the equipment. It is therefore not possible to rely on pumping systems based on viscous effects, which imply the fact that there are effective interactions between the gas molecules present, which are instead totally absent in this regime.

The operation of diffusion pumps is based on the transfer of momentum between an appropriately directed steam jet and the molecules of the gas to be pumped out of the work environment: for this reason they are also called "gas jet pumps” and categorized as “moment transfer” pumps. Their name derives from the fact that, during their initial development, it was noticed that the diffusion of a gas in the opposite direction to the motion of a jet of steam was impossible.

The steam used to obtain the pumping action derives from the heating / boiling process of high molecular weight substances, stable at high temperatures, such as hydrocarbons, silicone oils, polyphenyl esters and perfluoropolyethers (Fomblin). Historically, mercury has also been used, completely abandoned as a working fluid nowadays due to the health risks it poses. For this application, it is important to choose substances with very low vapor pressure at room temperature, so that, by condensing, they do not make a significant contribution to the total pressure. 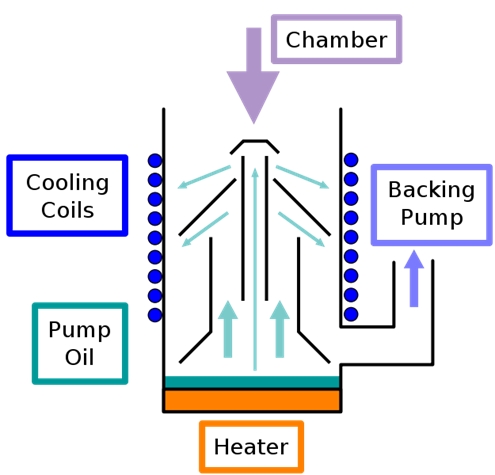 In its basic configuration (Fig. 1), a diffusion pump has a boiler, generally heated by an electric resistance, a central steam duct and a series of nozzles, oriented towards the high pressure section of the pump. Under operating conditions, the working fluid is at its boiling temperature: the resulting vapor flows through the central duct and, exiting the nozzles at high speed, transfers momentum to the gas molecules present, "dragging" them towards the exhaust duct. A secondary pump is connected to the latter (e.g. of the type with rotating compartments in an oil bath), capable of maintaining a pressure of 1e-1 / 1e-2 mbar at the outlet section. The momentum transfer occurs by collision between the vapor molecules and the gas molecules present. The steam, therefore, comes into contact with the external walls of the pump, which are kept at a temperature close to the ambient temperature by means of a water or air cooling system. In this way, the steam condenses on contact with the cold walls and returns to the kettle under the effect of gravity.

Modern diffusion pumps are multistage devices, being equipped with several series of nozzles, arranged at different heights, in such a way as to guarantee a pressure jump sufficient to reach the indicated vacuum degrees. The number of stages used is often 3 or 4.

To prevent a fraction of the vapor used to obtain the pumping action from diffusing into the working chamber, a cooled device called a baffle is often used, which is constructed in such a way as to be optically opaque in the axial direction of the pump, while allowing the passage of the gas molecules to be pumped (Fig. 2). Any vapor molecules directed towards the pump mouth, meeting the baffle, condense on its cold surfaces and are then captured, preventing their entry into the chamber. Of course, the use of the baffle reduces the pumping speed. 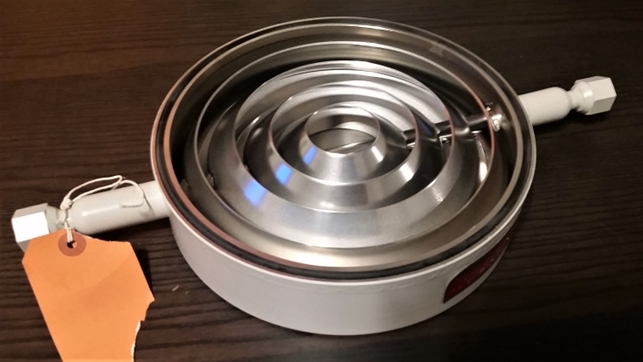 It is known, however, that under certain circumstances, a backstreaming of vapors into the working chamber is possible, and this can lead to contamination of the chamber itself.

For this reason, diffusion pumps are often unfairly considered “dirty” devices: in reality, if used correctly, they have extremely low levels of backstreaming of vapors that are tolerable in many applications.

For certain types of high vacuum processing, diffusion pumps are an excellent alternative, sometimes preferable to other options, such as turbomolecular pumps. Their main advantage, in fact, is simplicity and sturdiness, which make them a valid choice in industrial applications where very high flow rates and very heavy work cycles are required. Typical applications occur in the following processes: 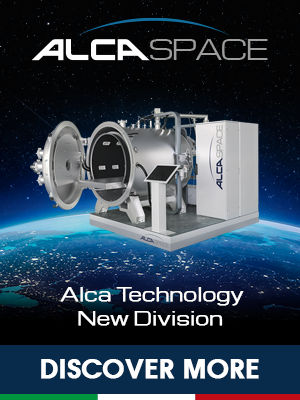